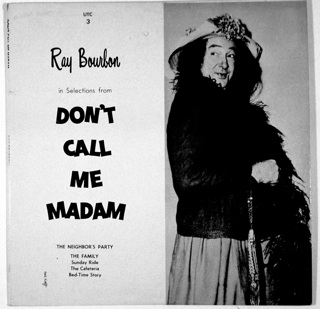 by
Rae Bourbon aka Ray Bourbon

Rae Bourbon (aka "Ray Bourbon") started in show business in silent movies and English music hall and, in the 1930s and 40s, was known for his gay themed nightclub review and performances in San Francisco, Los Angeles and many other cities.

"Don't Call Me Madam" was recorded and released in the 1950s and was the third album self-published by Ray on the UTC (or "Under the Counter") label. The album; sold at Bourbon's nightclub dates, via mail order, and in select record shops; consists of studio versions of some of Ray's popular nightclub songs.

This LP, which is properly titled "Ray Bourbon in Selections from 'Don't Call Me Madam'" appears to have been released in connection with Ray's Carnegie Hall show "Don't Call Me Madam". All tracks, except for "Tennesse" and "Country Ham", were included in the stage show and appear to be proper content of the earlier original release of the album in a 10" format. This series of files was mastered from the 12" version of the lp.
For more information about Ray Bourbon's life and work see https://raebourbon.com.
These recordings were digitized by Randy A. Riddle in 1998 from multiple lp record copies of the album from the collections of Jim Schulman and Randy A. Riddle.

Uploaded by coolcatdaddy on October 23, 2009